The Who tickets & concert schedule 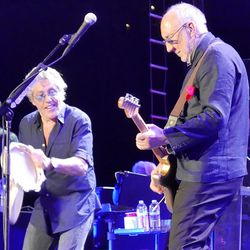 The Who are originated by Roger Daltrey’s first band that was named “The Detours” and changed their name in 1964, because they found out another one with a similar name. After some changes in the formation, Daltrey was the lead vocalist and the rest members were his schoolmates Pete Townshend (lead guitar) and John Entwistle (bass guitar), along with Keith Moon who joined them later, taking Doug Sandom’s place. (drums).

After the band’s members experimented with various music styles around rock genre, they began performing live in places around London and recorded their first song “I Can’t Explain” in 1964. Their first album was “My Generation” that came out in late 1965, with the homonymous song to separate. The Who continued writing songs and they released a few successful power pop songs like “Substitute”, “I Can’t Explain” and “Happy Jack.

“Pictures of Lily” was their next hit and after that The Who went to the USA for a small tour. When they returned, they record their third album “The Who Sell Out”, a psychedelic and power pop record that was released in late 1967 and contained the song “I Can See for Miles”. The Who followed a 18-month tour and the double record “Tommy” came out in May of 1969. The album's sound was mainly hard rock and it became two times platinum later in the USA, including the songs “Pinball Wizard”, “Go to the Mirror!” and “I’M Free”.

The band was already regarded as one of the greatest live bands. “Who’s Next”, was released in 1971 and is considered as one of the best albums in rock history! It reached the top on the UK charts and became three times platinum in the USA, including the hits “Baba O’Riley”, “Behind Blue Eyes” and “Won’t Get Fooled Again”. The band recorded another successful album, named “Quadrophenia”, that came out in October of 1973.

The Who wrote the music for the musical “Tommy” of 1975 which was awarded the “Rock Movie of the Year” and it was followed by the album “The Who by Numbers” in October of that year. “Who Are You” was the band’s eighth album that came out in 1978 and contained the famous song “Who Are You”. A few weeks later, Moon was found dead in his apartment, after having received 32 tablets of clomethiazole. The Who continued with Kenney Jones and they recorded two albums with him, 1981's “Face Dances" (no. 2 in the UK and no. 4 in the USA), which contains one of the band’s most popular songs, “You Better You Bet”, and “It’s Hard”, almost one year later.

The Who disbanded in 1983 and in the following years they returned mainly for live appearances until nowadays. In the meantime, they have recorded one more studio album named “Endless Wire”, that was released in 2006 and managed to enter at the top 10 in both UK and USA charts, while Entwistle died of a heart attack in 2002. They have received numerous awards and honors. Among them is their inductions into the “Rock and Roll Hall of Fame” in 1990 and into the UK Music Hall of Fame fifteen years later, while they have honored with the “Lifetime Achievement Award” from the Grammy Foundation.