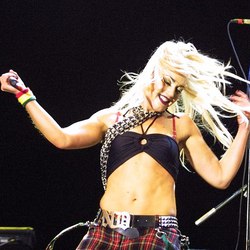 Gwen Stefani was born in Fullerton, California, in 1969 and grew up in Anaheim. Her real name is Gwen Renée Stefani and when she was studying in school, she had been diagnosed with Attention deficit hyperactivity disorder and dyslexia. Her first touch with music began, after listening to artists such as Bob Dylan and Emmylou Harris by her parents' encouragement.

Stefani's brother, Eric was a keyboardist and called her to join him in a new ska band called "No Doubt". With No Doubt, Stefani released six albums, with "Tragic Kingdom" to separate and a lot of successful hits, such as "Don't Speak", "Hey Baby", "Underneath It All" both won the "Best Pop Performance by a Duo or Group with Vocal" Grammy Award, in 2003 and 2004 ceremonies respectively.

After she won a Grammy Award with rapper Eve, for the song "Let Me Blow Ya Mind", Stefani released her first solo album named "Love. Angel. Music. Baby" in 2004, including collaborations with Linda Perry, Tony Kanal, Pharell Williams, André 3000 and many others. The album is characterized by many genres like electropop, dance rock, R&B, new wave, hip hop e.t.c. The album reached the seventh position on the US charts and became three times platinum later. Some of the hits are "Rich Girl" and "Hollaback Girl". In the same year, she appeared in one movie, while her voice was used in a video game character.

"The Sweet Escape", her second album, came out in late 2006. It also contains collaborations with various artists, while its music style is more electronic, with dance music elements. The homonymous song, entered at the top 10 in more than fifteen countries, while "Wind It Up" reached the top 10 in both the USA and the UK. She followed a tour around the world and later took a break from her solo career.

After touring with No Doubt, the band released one more album, and less than 2 years later, on April of 2014, Stefani returned to live appearances, starting from Coachella festival, next to Pharrell Williams. She took part in The Voice's seventh season and later she collaborated with Maroon 5 and Calvin Harris. She released two new songs, in October and December of 2014 and after a few more cooperations, the first single of the upcoming album, with the name "Used to Love You" (inspired by her divorce with Gavin Rossdale), came out in October of 2015. One more single followed, until the release of "This Is What the Truth Feels Like", her third album, in March of 2016.

Stefani's fourth album came out almost 1.5 years later, under the name " You Make It Feel Like Christmas", with six covers of Christmas songs and another six new tracks.