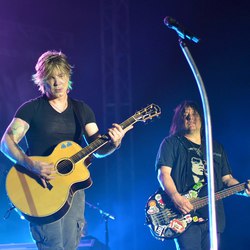 The Goo Goo Dolls’s history began in 1986, when friends and schoolmates Robby Tacac (bass and lead vocals) and George Tutuska (drums and, vocals) met Johnny Rzeznik (guitar and lead vocals), in Buffalo, New York. After their first homonymous album in 1987, the group started playing in several live events, supporting bands like Bad Religion, SNFU, Motorhead and many others.

Their second album was 1989’s Jed and it was followed by “Hold Me Up” which came out in October of 1990. Firstly, their music style was punk rock, but this changed with the release of 1993’s “Superstar Car Wash”, an alternative and college rock record, with punk and hard rock elements. After the completion of their next album, Tutuska was sucked and the group continued touring with Mike Malinin as the new drummer. “A Boy Named Goo” came out in March of 1995, including the hit “Name”, which entered the top five of the Billboard Hot 100. The album was characterized by its power pop and post-grunge sound, with elements of pop punk and managed to reach no. 27 on the US album charts. It was followed by 1998’s “Dizzy Up the Girl” which peaked at no. 15 on the album charts and became four times platinum in the USA. It contained the hits “Slide” and “Iris”, one of the groups signature song.

The Goo Goo Doll’s seventh album “Gutterflower” came out in April of 2002 and reached the fourth position on the charts (their highest place), including the song “Here Is Gone”. The group’s successes continued with 2006’s “Let Love In” (no. 9 on the Billboard 200), while Goo Goo Dolls recorded a song for the 2007’s film “Transformers” and appeared live in various TV-shows and live events. “Something for the Rest of Us” came out in August of 2010, peaking at no. 7 on the US album charts and the group continued touring, mainly in the USA and Canada. 2013’s “Magnetic” reached no. 8 on the charts and it was Malinin’s last album, who left at the end of that year.

Their most recent album is “Boxes” which came out in May of 2016, with the participation of many musicians, while the Goo Goo Dolls continue touring including only two original members to their line-up, Tacac and Rzeznik.