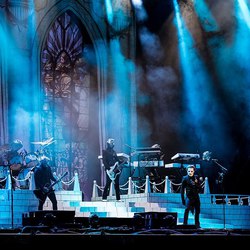 The eccentric band Ghost was created, when fellow musicians Tobias Forge and Gustaf Lindström after having recorded three songs, chose to form a rock band, that would keep an anonymous profile, with strong elements from the Scandinavian metal history and pictures from horror movies e.t.c. Firstly, Forge picked the nick "Papa Emeritus", he began to paint his face with a skull and to wear Papal regalia. The upcoming new members would be named as "Nameless Ghouls" and would be dressed in black hooded robes.

Forge became the lead singer and the band released their first album in 2010, under the name "Opus Eponymous". It won a nomination for Grammis Award of 2011, while Ghost started performing live, first in Germany, during "Hammer of Doom Festival" and later in various other fests, next to bands like Paradise Lost, Opeth, Mastodon and other. They later won the "Breakthrough Band" award, at the Metal Hammer Golden Gods Awards, in the summer of 2012.

In 2013, the band used the name Ghost B.C. in the USA (they abandoned it in 2015) and their second album, "Infestissumam", came out in April of that year. The album won the Grammi Award, after having reached the first position on the Swedish album charts. After the band toured around America and Europe, supporting bands such as Iron Maiden, Slayer and Alice In Chains, they released "If You Have Ghost", an EP with four covers and one live track. They continued touring in Australia and in North America in 2014.

The band's next album, "Meliora", was released in 2015 and contains the hit "Cirice", that gave Ghost the "Best Metal Performance" Grammy Award, in 2016. The frontman's new name, "Papa Emeritus III" was combined with a change in his hair color, without the characteristic miter on his head and the band followed a new series of tours. Forge received a lawsuit by four previous Ghost members that had left in 2016, for uncompleted payments and with the accusation that he was behaving like being to a solo project.

In late 2017, Ghost released the live album "Ceremony and Devotion", while a few months later, a new song came out, named "Rats", introducing the lead singer's new name "Cardinal Copia" and "Papa Nihil" as a new member (on saxophone). The fourth album, "Prequelle", came out in the summer of 2018, while "Rats" reached no. 3 on the Billboard 200.