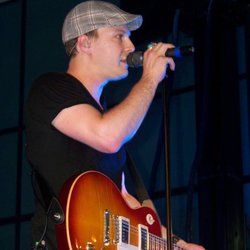 Gavin DeGraw was born in South Fallsburg, a hamlet in Sullivan County, New York, in 1977. His full name is Gavin Shane DeGraw and he has Irish and Russian Jewish ancestry from his parents. When he became eight, he began singing and learning piano, while his first influences were Sam Cooke and Ray Charles.

DeGraw followed a small group of musicians who used to play around Monticello and later he began writing his own songs. He left his studies and went to Boston, where he joined a music college for one year, while he became a member of a rock band. He later moved to Manhattan and began attending open-mic events. He began gaining fame and later he made his first contract with a record label. DeGraw’s first album named “Chariot” came out in July of 2003, with the song “I Don’t Want to Be” to separate. The song reached no. 10 on the Billboard Hot 100 chart and the album became platinum later., while DeGraw released an acoustic version in 2004.

DeGraw’s second and homonymous album came out in May of 2008, peaking at no. 7 on the US album charts, his highest until now. It included the song “In Love with a Girls” and was a more pop rock album. It was followed by 2009’s “Free” which peaked at no. 19 on the Billboard 200. The next one was “Sweeter” which came out in September of 2011. It reached no. 8 on the US charts and contained collaborations with artists such as Ryan Tedder and Andrew Frampton.

In the following years, another two studio and one compilation albums followed. “Make a Move” was DeGraw’s fifth album which peaked at no. 13 on the charts, while he continued with the release of “Finest Hour: The Best of Gavin DeGraw”, a compilation album that came out in October of next year. His most recent music record is 2016’s “Something Worth Saving” which contained the song “She Sets the City on Fire”. DeGraw has written songs of various music genres, from blue-eyed soul to pop and rock.