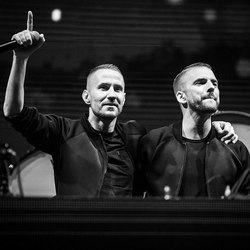 Galantis is a DJ duo from Sweden consisting of Christian Karlsson (known as Bloodshy) and Linus Eklöw (known as Style of Eye), both producers of electronic dance music and similar music genres. Karlsson had worked with artists like Britney Spears, Kylie Minogue, Madonna, Jennifer Lopez and others before he met Eklöw in 2007, who used to deal with techno and other underground styles.

Two years later, Eklöw collaborated with Karlsson in the latter's indie pop group named Miike Snow and they finally began working together in 2012, importing sounds from keyboards and drums to their project. One of their first songs were “Raveheart” and when they made their first contract, they released the single “Smile”, which was included in the duo’s first homonymous EP that came out in April of 2014. Galantis’ first studio album came out in the summer of 2015, under the name “Pharmacy”. It topped the US Dance/Electronic Albums chart while it peaked at no. 7 on the Swedish charts. It contained the single “Runaway (U & I)” which became popular in many European and not only countries (through Spotify), reaching the first position on the UK Singles charts. After the release of the album, Galantis followed a summer tour especially in Europe and North America.

2017’s album named “The Aviary” peaked at no. 4 on the US Dance charts, with the hit “No Money” to separate. In 2018 Galantis began working on their next album while their most recent releases are the remix to Kygo’s “Think About You” and the song “Bones”, a collaboration with OneRepublic.