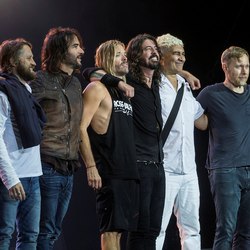 Foo Fighters started, when Dave Grohl, former drummer of Nirvana, wrote some songs which he recorded by playing all the instruments in almost every part and released them under the name "Foo Fighters". Firstly he tried to keep a low profile and then decided to promote the album and created the band.

Grohl wanted Nirvana's Krist Novoselic to become the new band's bassist, but after a second thought by both of them, he looked for other artists, with Nate Mendel (on bass guitar) and William Goldsmith (on drums) to be the first that joined the formation. Pat Smear, a previous touring member of Nirvana followed them and after their first live appearances, they released the homonymous album in 1995. When they began to record the second album, Grohl didn't like Goldsmith's style of playing and asked from him to be included in the tour, although his play won't be on the album. He refused and Taylor Hawkins took his place later.

"The Colour and the Shape", came out in 1997, including the hits "Monkey Wrench", "My Hero" and "Everlong". After Smear announced that he would leave the band, Franz Stahl took his place and he participated in the band's release of two songs that were used in movie soundtracks. In 1999, Stahl left the band and the other members recorded their third album, "There Is Nothing Left to Lose", that came out in late 1999. Among the songs, "Learn to Fly", was the first single that entered at the top 20 of the USA charts (19th place). Chris Shiflett became later the band's new guitarist. They introduced Queen's entrance in the "Rock & Roll Hall of Fame", while they appeared together in several live events.

After various live performances and a "crisis" between the members, the band managed to release the next album named "One by One", in October of 2002. Almost 1.5 years of touring passed, until the band returned to the studio to record "In Your Honor", that came out in 2005. The album contained the hit "Best of You". A lot of live appearances and fests followed, including an acoustic tour in the next summer, along with various artists. One of them was Pat Smear who returned to the band later.

In the following years, the band released 4 more albums, among them " Echoes, Silence, Patience & Grace" which won a Grammy Award for "Best Rock Album" and includes the hit "Pretender". Foo Fighters have collaborated with many artists (the album "Sonic Highways is an 8-track album featuring different artists) and have appeared in various fests and live shows. Previous touring member Rami Jaffee has joined the band permanently from 2017 (keyboards). The last album " Concrete and Gold" contains the hits "Run" and "The Sky Is a Neighborhood". The first won a Grammy Award for "Best Rock Song" in 2018.