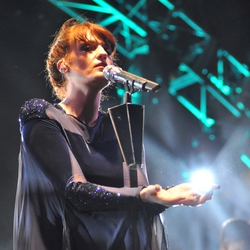 Florence and the Machine started as "Florence Robot/Isa Machine", a name that teenagers Florence Welch and Isabella "Machine" Summers used while they were performing together in several gigs in London. They found 3 other musicians, guitarist Robert Ackroyd, drummer Christopher Lloyd Hayden and harpist Tom Monger and changed the name of the new band to Florence and the Machine, in 2007, a band with indie rock and pop characteristics, but also with various other subgenres of rock.

Their first album, "Lungs", came out in the summer of 2009 and reached no. 1 in the UK. It also reached the top in the US Heatseekers Albums chart, with the hit "You've Got the Love" to separate, while three other, "Kiss with a Fist", "Dog Days Are Over" and "Cosmic Love" became parts of several movie soundtracks and TV series. Before the release of their second album, the band covered a song for "Rave on Buddy Holly", a tribute to Buddy Holly and they performed live one of their upcoming singles.

"Ceremonials", came out in 2011 and reached also the first position on the Official Albums Chart in the UK and sixth in the USA. The band's first no. 1 single was the remixed "Spectrum" that came out almost 9 months later. After heaving released 3 music videos, the next album came out first in Germany, then in the UK and after in the USA, with 3 and 4 days difference. It reached the top in both UK and USA charts and was nominated for five categories, at the Annual Grammy Awards for the period 2014-2015.

The band continued with many live appearances in fests around Europe and they recorded three songs for the video game "Final Fantasy XV" in 2016, with one of them to be a cover of "Stand by Me", the famous song by Ben E. King. After Hayden left the band, they released "High as Hope", their fourth album in the summer of 2018 and continued touring.