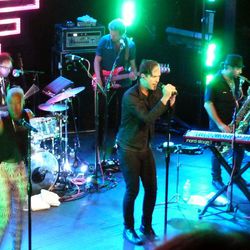 Fitz and The Tantrums were created in 2008 in Los Angeles California by Michael Fitzpatrick (vocals, keyboards), who after writing the song "Breakin' the Chains of Love", called his friend James King (saxophone, flute and other) who brought Noelle Scaggs (vocals, percussion) and John Wicks (drums). The latest suggested Jeremy Ruzumna (keyboards) complete the formation, while Ethan Phillips became their bassist.

After their first shows, they recorded the EP “Songs for a Breakup, Vol. 1” which came out in the summer of 2009. They began touring, including a series of appearances next to Maroon 5 and after they signed a new contract, they released their debut album named “Pickin' Up the Pieces” in 2010, with the song “MoneyGrabber” to separate. Phillips was replaced by Joseph Karnes later and the group continued the live performances, including an international tour in 2011. Fitz and The Tantrums’ second album was 2013’s “More Than Just a Dream”, which peaked at no. 26 on the Billboard 200 chart. The songs “Out of My League” and “The Walker”, both topped the Alternative Songs chart in the USA.

Fitz and The Tantrums continued the live performances, while their next and synonymous album came out in June of 2016 and reached no. 17 on the US album charts. It included the song “HandClap” while its sound contained pop rock elements, although the group’s music style is characterized as neo-soul and indie pop.