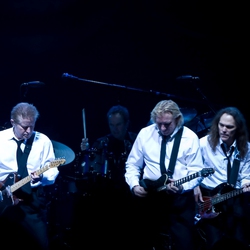 The Eagles started when Don Henley and Glenn Frey, after having joined Linda Ronstadt' band, along with Randy Meisner and Bernie Leadon who came later, created their own group, firstly under the name "Teen King and the Emergencies", which finally changed to "Eagles". They are regarded as a rock club, with country and rock elements.

The band released its homonymous album in 1972, with the hits "Take It Easy" and "Witchy Woman" to separate. "Desperado" was their second album, that came out one year later. The next one, "On the Border", has a tendency towards hard rock and includes the top hit "Best of My Love". It is the album in which the guitarist "Don Felder" was involved and then joined the band.

The Eagles appeared in the rock festival "California Jam" and next summer the album "One of These Nights" came out. It topped the US album chart, including three successful singles: The homonymous song, that reached also the top of the charts and the song "Lyin' Eyes" that gave them later the "Best Pop Performance by a Duo or Group with Vocals" Grammy Award and the song "Take It to the Limit". A few months later, Leadon abandoned the group, because he didn't like the changes in the band's sound. Joe Walsh took his place.

After the commercial success of the band's collection album, "Their Greatest Hits (1971-1975), the band's next studio album came out in late 1976, under the name "Hotel California". The album which is Eagles' most successful in their history, according to Rolling Stone magazine reached no. 37 on "The 500 Greatest Albums of All Time" list and has become 26 times platinum. Among its hits, the homonymous song separates, it became worldwide famous and is the bands' most characteristic song. After their tour in 1977, Meisner left the band and Timothy B. Schmit took his place.

Another successful album followed, in 1979. "The Long Run", contains the hits "Heartache Tonight", "I Can't Tell You Why" and "In The City". After live shows, collaborations and a live album, the band's internal confrontations led to their disbanding. The members dealt with solo careers and after the release of the tribute album, "Common Thread: The Songs of the Eagles" in 1993, the band returned one year later. They release their second live album (with two new songs) named "Hell Freezes Over" that entered at the top of the charts, being followed by successful tours.

The following years in the band's history, includes Don Felder's dismissal after legal disputes with the band, a successful greatest hits collection, a double live DVD , their seventh album, "Long Road Out of Eden", along with the tour (two singles of the album brought to them two Grammy Awards), a documentary and the death of Glenn Frey. The band continues touring in nowadays and is among the bands that have sold the most albums in history.