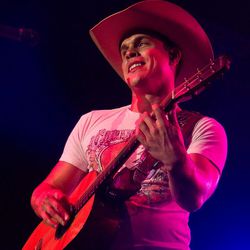 Dustin Lynch was born in Tullahoma, Tennessee, in 1985 and his first touch with music was around his eight when he began learning the guitar. He left it very quickly, but he dealt with it again at his fifteen, and almost one year later he made his first live appearance in a club and created his first band in Nashville, where he went to live later, in order to be able to study and to continue performing live and writing songs at the same time . After finishing his studies on biology in 2007, he decided to follow a career in country music and a few years later Lynch made his first contract.

His full name is Dustin Charles Lynch and his first homonymous album came out in 2012, reaching the top of both Billboard Top Country and Independent album charts (also no. 13 on the Billboard 200), with the song “Cowboys and Angels” to separate. Lynch collaborated with James Wesley in the song “Thank a Farmer” in 2013 and almost a year later, his second album came out, under the name “Where It’s At”. The album peaked at the second place of the country charts, including three songs that also became number one, the synonymous song, along with “Hell of a Night” and “Mind Reader”.

“Current Mood”, Lynch’s third studio album came out in 2016 and contained the songs “Small Town Boy” and “Seein’ Red”. He entered the “Grand Ole Opry” in 2018, while he has been nominated for four music awards, including the “Top New Artist of the Year” at the Academy of Country Music Awards in 2014 (the other three are one for the single “Cowboys and Angels” and two for the corresponding video).