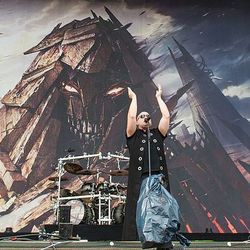 Disturbed were created in 1994, when three members of a band named "Brawl", with Dan Donegan on guitar, Steve Kmak on bass and Mike Wengren on drums, looked for a new singer since their lead vocalist Erich Awalt left the band. They found David Draiman in 2016 and formed Disturbed, in Chicago, Illinois.

The first album of this American heavy metal and hard rock band, came out in March of 2000, under the name "The Sickness" and reached no. 20 on the album charts. Their second album "Believe", came out in 2002 and became an instant success. It topped the charts, including the hit "Prayer", which was used to many TV stations. Later, after one of the group's tour, Steve Kmak was replaced by John Moyer.

The band's next successful album was "Ten Thousand Fists" (also no. 1), which became platinum later. The band continued taking part in fests and large live events and in late 2007, they released "Indestructible". The album became number one in 4 countries, including the USA. It was followed by "Live & Indestructible" in 2008, along with a tour in North America and Oceania, another one in Europe.

After taking part in various projects such as a cover album, a new edition of their debut album and remastered tracks, the band began working on their next album, "Asylum", that came out at the end of the summer of 2010. Disturbed became the third band after Metallica and Dave Matthews Band, with their four albums in a row having reached the first position on the US charts. When they finished a tour in the USA, in 2011, the band members decided to stop working together, due to personal differences.

In the summer of 2015, Disturbed reunited and released their sixth album "Immortalized", which also entered at the top. John Moyer returned to the recording of the next album after almost eight years. "Evolution" came out in 2018 and contained the hit "Are You Ready".