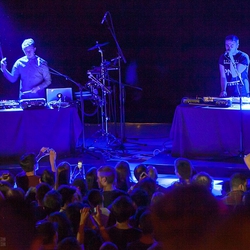 Disclosure were created by brothers Lawrence (Guy and Howard) in Surrey, England, in 2010. When they were born, their parents were professional musicians, so they dealt with music from a very young age, learning three musical instruments, while Howard began singing. During their studies, Guy started playing drums in a schoolmate band and he studied classical music later. When he became a fan of house music, Guy along with his brother began studying several artists from various music genres like deep house, UK garage e.t.c.

The duo started creating their own music and became known from social media. After the brothers signed their first contract they continued releasing songs, while their first hit was “Latch”, that came out in October of 2012. It was a collaboration with Sam Smith and managed to reach the eleventh position on the UK charts (no. 7 in the USA). Disclosure’s first album “Settle” came out in the summer of 2013 and became an instant success, topping the album charts in the UK. It included the hits “White Noise” and “You & Me”, collaborations with AlunaGeorge and Eliza Doolittle respectively. The duo took part in fests and live shows, while the album won a Grammy nomination.

After an international tour, Disclosure recorded their second album named “Caracal” that came out in September of 2015, also entering at the top of the UK charts. Among its hits is the song “Omen”, one more success with Sam Smith behind vocals. The album won also a Grammy nomination and contained collaborations with many artists, such as Gregory Porter, Lorde, The Weeknd and others.

The duo took a short break in 2017 and at the beginning of 2018, the brothers announced that they had started working to their next album, which will come out in the summer of 2019.