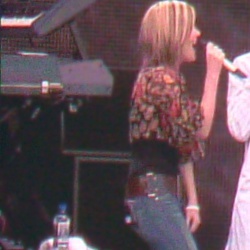 Dido was born on the 25th of December 1971, in Kensington, London. During her studies, she was taught how to play the piano, violin and recorder. The following years, she learned to play the guitar too. Her full name is Dido Florian Cloud de Bounevialle O'Malley Armstrong.

Her first work was a collection, consisted mainly of demos, named "Odds & Ends". In 1999, she released "No Angel", her first album, with the hit "Here with Me" becoming an instant success, being used in a TV program and a movie. Also, her song "Thank You" became part of the soundtrack for a movie.

Eminem's "Stan", the song that contains the first line of "Thank You" and her later appearance in the video, were the key reasons to become known in the USA. The album entered the top five on the charts in the UK, while almost 2 years later became the most-selling album in all over the world in 2001.

Dido's second album, "Life for Rent", came out in 2003 and includes the hits "White Flag" and "Life for Rent". She later made three appearances on the benefit concerts "Live 8", while she helped her brother with the vocals on his second album. Her next album, "Safe Trip Home", contains collaborations with several artists, such as Rollo Armstrong and Brian Eno.

After the song "If I Rise" with A.R. Rahman that came out in early 2011 and received the "Critics' Choice Movie Award for Best Song", Dido recorded "Girl Who Got Away", that came out almost 2 years later. The album, with "No Freedom" its most known track, contains also a lot of collaborations. The "Greatest Hits" collection was Dido's next release in November of 2013 until her next album, "Still on My Mind", that came out in March of 2019.