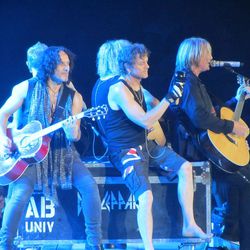 Def Leppard started when fellow students Rick Savage, Pete Willis and Tony Kenning created "Atomic Mass" in Sheffield, South Yorkshire, in 1977 and after the arrival of Joe Elliott to the band, they changed it to Def Leppard. In early 1978, guitarist Steve Clark filled the formation, while Frank Noon firstly and Rick Allen later, took Kenning's place on drums.

Def Leppard, who are regarded as major representatives of the "new wave of British heavy metal" movement, began increasing their fans in hard rock and heavy metal scene. Their first album, "On Through the Night", came out in 1980 and was received with mixed critics, because of its similar style according to the fans, with the American music scene.

Their second album was recorded with AC/DC's producer and came out in the summer of 1981, with the name "High 'n' Dry". The album contains the hit "Bringin' On the Heartbreak". One year later, the band sacked Willis because he had problems with alcoholism and Phil Collen took his place. They recorded "Pyromania" that came out in early 1983 and it was a more mainstream album, with glam metal features. It contained the hits "Photograph", "Foolin" and "Rock of Ages" and became Diamond later.

In 1984, the group moved to Dublin and at the end of that year, Allen lost his left arm in a car accident. However, he continued being the drummer of the band, with the full support by his fellow members. The next successful album was "Hysteria", which topped the charts in the USA, including the hits "Animal" and "Pour Some Sugar on Me", one of the band's more characteristic songs. Also, the track "Love Bites" became number one and in 1989, Def Leppard gained two awards at the American Music Awards of 1989.

After Clark's death in 1991, Vivian Campbell took his place. Among the following years, the band released 7 more studio albums (one of them with covers), collections and various projects, until 2015. Each album reached the top 20 on the American charts, with "Adrenalize", becoming number one. Many awards, nominations, fests, collaborations and several live shows followed, while some of the band's hits in chronological order are "Let's Get Rocked", "Two Steps Behind", "When Love & Hate Collide", "Work It Out" and many others.