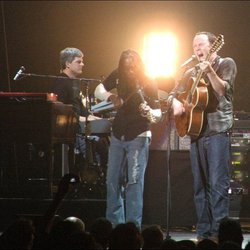 Dave Matthews Band, were created in 1991. David John Matthews, a songwriter from Charlottesville, Virginia, was persuaded by a friend to record some of his songs. He then met drummer Carter Beauford and saxophonist LeRoi Moore and began working together. Bassist player Stefan Lessard and keyboardist Peter Griesar joined the group and the next year, violinist Boyd Tinsley completed the formation.

After their first demo and some appearances in live events, Griesar left the band, before the album "Remember Two Things" comes out in 1993, on their independent label. The album included live records and released again by RCA this time, less than 4 years later. The band's first EP, "Recently", was followed by their first album, "Under the Table and Dreaming", in 1994, with the hits "What Would You Say", "Ants Marching" and "Satellite".

1996's "Crash", was a big success and the song "So Much to Say" gave them a Grammy Award for "Best Rock Performance by a Duo or Group". "Live at Red Rocks 8.15.95.", the band's first live album came out in October of 1997 and it was followed by their third studio album, "Before These Crowded Streets", in 1998, which included a lot of collaborations, with artists like Alanis Morissette, Butch Taylor, Béla Fleck and other. The hits "Crush" and "Before These Crowded Streets" are included in the album, which has sold over 21.000.000. copies all over the world, until nowadays. The next album, 2001's "Everyday", was also successful, containing the hits "I Did It", "The Space Between" and "Everyday", as well as 2002's "Busted Stuff".

After many live shows, collaborations and various projects, the band released "Stand Up", their sixth album, in 2005. The album's music style included a lot of funk elements, nevertheless, it topped again the US album chart. the hits "Dreamgirl", "American Baby", "Everybody Wake Up" and others. After the release of "The Best of What's Around Vol. 1", their first greatest hits album, in 2006, the band took a small break and returned with live appearances, taking part in many festivals and special concerts. Jeff Coffin replaced Moore who died in 2008, and their next album, " Big Whiskey & the GrooGrux King" came out in 2009. It won 2 Grammy Awards in 2010, for "Album of the Year" and for "Best Rock Album".

"Away from the World", their eighth album, came out in 2012 and became their sixth album on the row to enter the top on the US charts. Among their later live appearances, was their tour in South Africa in 2013, where Matthews was born. They also played for the first time in Abu Dhabi and in Poland. During their summer tour in 2018, they released their ninth album "Come Tomorrow", which also reached the top of the charts. Previously, Tinsley had been sacked, due to an accusation for sexual harassment.