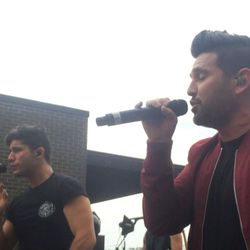 Dan Shay consists of Dan Smyers (from Pennsylvania) and Shay Mooney (from Arkansas). The country duo met in late 2012 in Nashville, began writing songs immediately and a few months later made their first contract. Smyers grew up in Wexford and studied finance, while he used to play American football. Mooney grew up in Natural Dam and he studied in a Christian college. Smyers had joined a couple of music groups, while Mooney had begun a solo career.

The duo’s first single was “19 You Me” and their first album came out in 2014, under the name “Where It All Began”. The album reached the top of the Country Albums chart (no. 6 on the Billboard 200), including the hit “Nothin' Like You”. After they opened for Hunter Hayes and Blake Shelton on their tours, they started their "Where It All Began Tour" until 2015. It was followed by “Just the Right Kind of Crazy Tour” in the same year, with Kelsea Ballerini as special guest.

Dan Shay’s second album was “Obsessed”, that was released in the summer of 2016, it peaked at no. 2 on the Top Country Albums in the USA (no. 8 on the Billboard 200) and it also topped at the UK Country Albums chart. Among its hits are the songs “From the Ground Up” and “How Not To”. It was followed by the homonymous third album, which came out in June of 2018, including the hits “Tequila” and “Speechless”, both reaching the top of the country charts in the USA. The album, which contains cooperation with Kelly Clarkson, entered at no. 1 on the US Top Country Albums chart (no. 6 on the Billboard 200) and became gold later, as well as their first album.

The duo won the “Best Country Duo Group Performance” Grammy Award for “Tequila”, in 2019, while it started the “Dan Shay Tour”, which includes appearances in the USA and Canada.