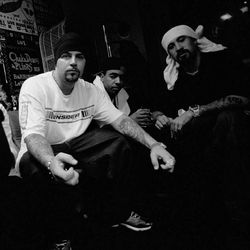 Cypress Hill (inspired by a street name) were formed by brothers Reyes Senen and Ulpiano Sergio, in 1988. Born in Pinar del Río, Cuba, when their family went to live in South Gate, California, in the USA, they were joined by Lawrence Muggerud and Louis Freese and created the rap band DVX. After Sergio Reyes left the band, his brother (who uses the nick Sen Dog), along with Muggered (DJ Muggs) and Freese (B-Real) chose "Cypress Hill" as the new name of the band.

The band's first album with the same name, came out in 1991. The success of the album which became double platinum later and included the songs "How I Could Just Kill a Man" and "The Phuncky Feel One", led them to perform in 1992's Lollapalooza festival. Their second album, "Black Sunday", with the hit "Insane in the Brain" was released in 1993 and reached the top of the US charts. This album became three times platinum in the USA.

After a number of live shows, festivals and collaborations, the band released "III: Temples of Boom", in 1995 and Cypress Hill continued touring with well-known bands and artists. "Unreleased and Revamped", an EP with rare tracks mixed, came out in the summer of 1996. The next year, all the band members concentrated on their solo careers and in 1998, they released "IV". The album with the famous songs "Tequila Sunrise" and "Dr. Greenthumb" became gold in the USA.

It was followed by 2000's "Skull & Bones", which has two discs. The first one is characterized by its hip hop style, while the "Bones" has a rap metal and rock character. It topped the charts in the USA, including the hits "Rock Superstar" and "Rap Superstar". Their first live album was "Live at the Fillmore", in 2000 and their sixth studio work "Stoned Raiders", came out one year later, but it wasn't successful.

"Till Death Do Us Part", the band's seventh album, came out in 2004, with a lot of reggae elements. It was followed by a collection album, under the name "Greatest Hits From the Bong", in 2005, with two new songs. They continued touring and taking part in various projects and they released "Rise Up" after almost 4.5 years. The album had a lot of collaborations with artists such as Tom Morello, Everlast, Pitbull, Mike Shinoda and Marc Anthony. They promoted the album with the homonymous tour without DJ Muggs (Julio G took his place temporally) and after a few festivals that followed, they worked with Rusko in order to record the 2012's EP "Cypress X Rusko". With Dj Muggs back in composition, the band's ninth studio album "Elephants on Acid", came out in 2018. 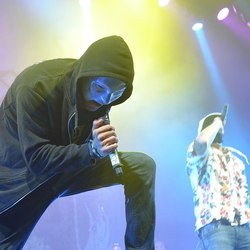