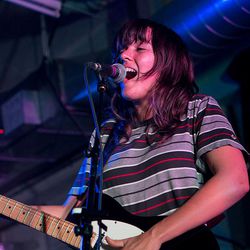 Courtney Barnett was born in Sydney, Australia, in 1987. She studied in Hobart and began dealing with music in 2009. Her first live appearances were with a few rock bands from Melbourne, including participation in Immigrant Union’s second album, while she released her first EP in 2012.

Barnett collaborated with Jen Cloher in 2013 and after she made a new contract she gained attention with the release of “The Double EP: A Sea of Split Peas” in October of the same year. Her first album “Sometimes I Sit and Think, and Sometimes I Just Sit” came out in March of 2015 and reached no. 4 on the Australian album charts. It topped the US Independent, Top Alternative and Top Rock Albums charts, peaking at no. 20 on the Billboard 200. Barnett along with her backing band members toured around the world while the album won four ARIA Music Awards and she won a Grammy nomination later.

After several live appearances, Barnett worked with Kurt Vile in “Lotta Sea Lice”, an album that came out in October of 2017 and reached the fifth place on the ARIA charts. It contained collaborations with other artists and received positive reviews. Her second album named “Tell Me How You Really Feel” came out in May of 2018 and entered at no. 2 on the Australian charts (no. 9 in the UK and no. 22 in the USA).

Barnett’s music style varies from indie and alternative rock to "dolewave", an Australian music genre, while some of her songs contain psychedelic rock elements. She has stated that among the artists she has been influenced is Jen Cloher, with whom they were together for about six years.