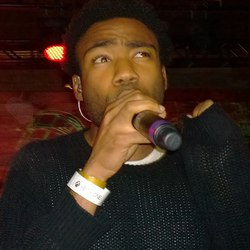 Childish Gambino is the name that Donald McKinley Glover Jr. uses for his music career, usually as a rapper. He was born in Kern County, California, in 1983. He had started his first steps in music (as a disc jockey, producer of electronic music e.t.c.) before he finished the Tisch School of the Arts in New York in 2006.

Glover's first work as a writer was in 30 Rock TV series and in 2008 he released "Sick Boi", a small music compilation. After his roles in comedy shows and other projects, such as "Community", the TV series that made him more popular, he released one more "mixtape", under the name "Poindexter", in 2009. Less than 2 years later, Glover released "EP", including five songs and after the "IAMDONALD" tour, his first album "Camp", came out in 2011. The album reached no. 11 on the US albums chart, including the song "Heartbeat".

Glover continued working as an actor, writer, director and producer, but also collaborated with artists such as Leona Lewis, he took part in music shows, while he was appearing in more TV shows. His second album "Because the Internet", came out in 2013. The album became gold later, with the song "3005" to separate. After one more mixtape and another EP, he managed to be nominated for 2 Grammy Awards in 2015.

Three movies and two participations in Soundtracks followed, until the successful l "Atlanta", the comedy-drama TV series that gave him an Emmy Award, in 2016. His next music album was "Awaken, My Love", that came out in December of the same year and became platinum, after having reached the fifth place in the USA. One of the album's songs, "Redbone", gave Glover a Grammy for "Best Traditional R&B Performance" in 2018.

Glover played in Marvel's "Spider-Man: Homecoming" in 2017 and Disney's "Solo: A Star Wars Story" one year later, while he released the hit "This Is America" in 2018, that topped the US charts for the first time. In the summer of that year, his third EP "Summer Pack" came out, including the songs "Summertime Magic" and "Feels Like Summer". His last tour as Childish Gambino was "This is America Tour".