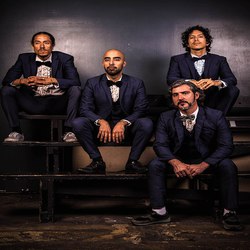 Chicano Batman started as a three-member group in 2008, in Los Angeles, California. The original formation consisted of half Mexican, half Colombian vocalist Bardo Martinez (also guitar and keyboards), Mexican-American bassist and vocalist Eduardo Arenas and Colombian drummer Gabriel Villa. After they self-released the homonymous LP in 2009, guitarist Carlos Arévalo who has Mexican and Salvadoran ancestry joined the group.

The quartet made its first contract and re-released “Chicano Batman” in 2010. The group members had influences from the 60’s and 70’s sounds such as tropical music and soul music with psychedelic elements and have been inspired by artists and bands like Caetano Veloso, Curtis Mayfield or The Beatles! Their next work was the 2012’s EP named “Joven Navegante” and was followed by “Magma” in 2013. After their second album “Cycles of Existential Rhyme” that came out in February of 2014, Chicano Batman began gaining more fans, by taking part in several festivals and live shows such as Coachella, Ruido Fest e.t.c. They opened for artists like Jack White and the blues-rock band Alabama Shakes.

Chicano Batman have released another three EPs, while their most recent album is “Freedom Is Free” that came out in March of 2017. They continued their live appearances, they performed in TV shows and they even took part in an advertisement in 2018.