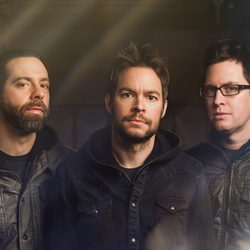 Chevelle were created by brothers Pete and Sam Loeffler in Grayslake, Illinois, in 1995. Their name was inspired by the fast cars that the whole family liked. Their little brother Joe joined the line-up and they released the first album, "Point # 1" in 1999, along with Steve Albini. Entering in the Christian music industry, the album won 3 GMA Dove Awards, one for "Hard Music Album" and two for the hits "Mia" and "Point".

After several appearances as support to bigger bands, their second album "Wonder What's Next", came out in 2002. The album entered at the top 20 on the US album chart and became platinum later, including the hits "The Red" and "Send the Pain Below". Chevelle took part in fests and toured with bands such as Audioslave and Disturbed. Their third album "This Type of Thinking (Could Do Us In) came out in 2004 and peaked at the eighth position on the charts, becoming gold after almost six weeks. The most successful songs were "Vitamin R (Leading US Along)" and "The Clincher. Joe Loeffler left the band (it is rumored that he was fired) and they hired Dean Bernardini (brother-in-law), during their tours.

"Vena Sera" came out in 2007, with the song "I Get It" to separate. The band later continued touring and at the end of the summer of 2009, they released "Sci-Fi Crimes", the band's fifth album, which peaked at the sixth position on the charts. It was followed by a live DVD-CD named "Any Last Words" and "Hats Off to the Bull", their next studio album that came out in late 2011 and contained the song "Face to the Floor".

After 2012's collection album "Stray Arrows: A Collection of Favorites", almost 1.5 years later, Chevelle released their seventh album "La Gárgola", which topped the Rock Albums chart. Another two records came out, 2016's "The North Corridor" and "12 Bloody Spies" in 2018, which is a compilation album with B-sides, covers, remixes and rare tracks.