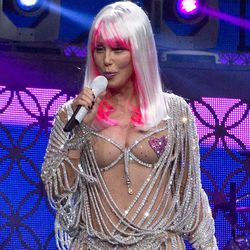 Cherilyn Sarkisian, known as Cher, was born in 1946, in El Centro, California. When she became 16, she left her family and went to Los Angeles. She started acting lessons, while she was working as a dancer around Sunset Strip. After a lot of efforts to promote herself, with the help of her friend Sonny Bono, she released her first single as "Bonnie Jo Mason" in 1964. Later, Cher married Bono and they worked together releasing some singles, under the name "Caesar & Cleo". After several solo projects, Cher released her first album, "All I Really Want To Do", in 1965.

With the new name "Sonny & Cher", Cher and her partner-lover continued working together, releasing new songs, like the hit "I Got You Babe" that topped the USA charts, while they took part in a lot of shows. Their first album, "Look at Us" came out in 1965. They recorded several hits, while Cher, still working with Sonny, released 3 successful albums. Among them, the song "Bang Bang (My Baby Shot Me Down)" became no. 2 single in America. In 1971, the married couple started hosting the successful TV-Show, "The Sonny & Cher Comedy Hour".

Cher's first solo album came out in 1971 by and became gold in America, with the song "Gypsys, Tramps & Thieves" entering at the top of the US charts. "Foxy Lady", Cher's eight solo album was also a success, until the failure of "Bittersweet White Light", which came out in 1973. The next album, "Half-Breed" became gold, while the homonymous single became also no. 1 in the USA.

Sonny & Cher released four more albums, until they divorced in 1975. One year earlier, Cher's performances in "The Sonny & Cher Comedy Hour", gave her a Golden Globe Award, as "Best Actress-Television Series Musical or Comedy. Her first album after the divorce was "Stars" and despite being a commercial failure, it is regarded as one of her classics!

After taking part in TV-Shows, including a second try with Sonny in "The Sonny and Cher Show", Cher released two more unsuccessful albums, along with 1979's "Take Me Home", which became gold in the USA. She made a lot of collaborations and followed a movie career, releasing nine more albums, with "Cher", Heart of Stone" and "Believe" to stand out until 2001. Cher continued her touring success, she played in the musical "Burlesque" and almost twelve years after her previous album, she came back with 2013's "Closer to the Truth", which entered at the third place of the US album charts, as well as her twenty-sixth album "Dancing Queen", that came out in 2018.

Cher has received numerous music and not only awards, including one Grammy for "Believe" in 2000, an Oscar for 1988's movie "Moonstruck", an Emmy in 2003 for "The Farewell Tour" and various other. She is regarded as one of the most famous pop stars and "divas" in the artistic area.