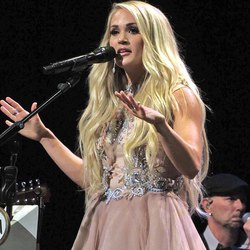 Carrie Underwood was born in Muskogee, Oklahoma, in 1983. When she was young, she made appearances in local talent shows and she used to sing in small live events, even in church. After she finished her studies, she decided to take part in the "American Idol" of the 2004-2005 season. In the final, she performed "Bless the Broken Road" next to Rascal Flatts, which gave her the 1st place.

Her first song, "Inside Your Heaven", came out in the summer of 2005 and reached the top, not only in the US chart (the only single of that decade) but also in Canada. Her first album, "Some Hearts", came out a few months later and topped the country charts. The album was a great commercial success, including a most selling country album for two years in the USA and becoming top in many other categories. Also, four singles from the album reached the top ten on the US country charts, the three in the first place. Underwood won also several awards that period, such as the "Top New Female Vocalist" on the Academy of Country Music Awards of 2006, the "Horizon Award" and "Female Vocalist of the Year" at the CMA Awards, two Grammy Awards in 2007 and many others.

After many live appearances and music shows, Underwood released her second album, "Carnival Ride", in 2007, which became four times platinum later. It also entered at the top of the charts, along with 4 hits and became platinum too. Until the end of that year, she had entered in the first place of five Billboard charts of the whole year. She gained more music awards, including an international one.

Underwood continued collecting awards and in May of 2008, she entered the Grand Ole Opry. "Play On", her third album came out in 2009, with the hits "Cowboy Casanova", "Temporary Home", "Undo It" and "Mama's Song" to separate. The album became later three times platinum. After tours, live shows and even more music awards, she released "Blown Away", her next album, that reached - like the previous - the top of the USA charts again.

Underwood's first collection was "Greatest Hits: Decade # 1, while her fifth album, "Storyteller", came out in 2015, also entering at the top of the country charts. It contained the hits "Smoke Break", "Church Bells" and others. After the "Storyteller Tour" and even more awards, she took a break to dedicate to his family. When she overcame an injury, she collaborated with artists such as Ludacris and David Garcia, while in 2018 she won one more CMT Music Award and completed her next album, "Cry Pretty", that came out in September of that year and topped the charts in more than 20 countries.