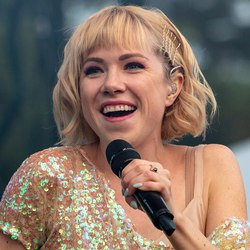 Carly Rae Jepsen was born in 1985 in Mission, British Columbia. She loved the musical theatre from a very young age when she had roles in various student events and she joined the Canadian College of Performing Arts later. When she finished her studies she went to Vancouver where after changing a few jobs, she used to write her own songs and to perform at open mic nights.

In 2017, after taking part in Canadian Idol, she took third place and after her first demo, she managed to make a contract. Her first album named “Tug of War” came out in September of 2008, with the synonymous song along with “Bucket” to separate in Canada. Jepsen followed a tour in 2009 and she began recording her songs for the next album in 2011. One of them, “Call Me Maybe”, was promoted by Justin Bieber and was included in the EP “Curiosity” which came out in February of 2012. The song topped the charts in many countries, including Canada and the USA. The album “Kiss” was released a few months later and reached no. 5 and no. 6 on Canadian and US album charts, including also the hit “Good Time”, a collaboration with Owl City”. “Call Me Maybe” won various music awards in that year, while Jepsen won the “New Artist of the Year” American Music Award and a Grammy nomination for “Call Me Maybe”.

After the “The Summer Kiss Tour”, Jepsen had a role in the 2014’s production of “Rodgers Hammerstein's Cinderella”, while her second album “Emotion” came out in the summer of 2015. It reached no. 16 on the US Billboard 200 (no. 8 in Canada) with the song “I Really Like You” to separate. She started later the “Gimmie Love Tour” and her next two releases were a compilation album and the EP “Emotion: Side B”, in the summer of 2016. In 2018, she followed Katy Perry on a tour and she released the song “Party for One”, in October of that year.

Jepsen’s upcoming album is “Dedicated”, which is going to come out in May of 2019. The Canadian pop singer and songwriter has a soprano vocal range, while her influences during her first recordings were from folk and rock artists, while later she was inspired by pop and dance musicians.