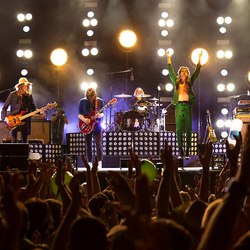 Cage the Elephant were created in 2006 in Bowling Green, Kentucky, by brothers Matt Shultz (vocals, guitars) and Brad Shultz (rhythm and lead guitar, keyboards), along with Jared Champion (drums) and Daniel Tichenor (bass).

After their first contract, they supported Queens of the Stone Age on their tour and they settled in London later. The band appeared on a famous English TV-show and later released their first homonymous album in the summer of 2008. It became platinum in America later, after its release in March of 2009, with the song “Ain't No Rest for the Wicked” to separate. Cage the Elephant continued supporting other rock bands while they also appeared in a TV-show and a couple of famous fests in America. Their second album “Thank You, Happy Birthday” came out in the beginning of 2011 and reached the second position on the US album charts (their highest), including the hit “Shake Me Down”.

The band continued with a series of live performances, while they followed Foo Fighters on a tour. After a live album in 2012, they returned to the studio and recorded “Melophobia” which came out in October of 2013, peaking at no. 15 on the album charts. It contained the songs “Come a Little Closer” and “Cigarette Daydreams”. Parrish left the group later and Nick Bockrath took his place as a touring member. He took part in their next album “Tell Me I’m Pretty” which came out in late 2015, including the songs “Mess Around” and “Trouble”.

Bockrath along with another touring member, Matthan Minster (piano, keyboards, guitar), became official members in 2017, while Cage the Elephant’s fifth album “Social Cues” came out in April of 2019. Their sound is something between alternative and indie rock, with garage rock and punk blues elements.