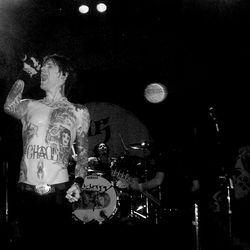 Buckcherry began in 1995, from Anaheim, California, when Josh Todd (lead singer) and Keith Nelson (lead guitarist), started to make some demos. Together with Devon Glenn on drums and Jonathan Brightman on bass, they created Sparrow. After some performances, the band chose the name Buckcherry.

"Buckcherry" was also the name for the first album of the band. It came out in 1999, with the hits "Lit Up", Dead Again", "For the Movies and "Check Your Head", receiving good reviews and becoming gold. The same year, Yogi Lonich (rhythm guitar) joined the band, they released "Time Bomb", in 2001, their second album. It didn't go well and in early 2002, Lonich and Glenn abandoned the line-up. Todd and Devon replaced them with Dave Markasky, Matt Lawrence and Josh Fleeger, but they didn't manage to complete the third album. After taking part in a Slash's project, Todd rejoined with Nelson in 2005 to continue as Buckcherry. They found Stevie D. Xavier Muriel and Jimmy Ashhurst, and released "15", Buckcherry's third album, including the hits "Crazy Bitch", "Next 2 You" and "Sorry".

After a tour in 2008, the band's next album, "Black Butterfly", came out in September of that year. The album reached number eight on the US charts. Buckcherry recorded a live album following a Canadian tour, which came out in 2009, under the name "Live & Loud 2009". The band's fifth album, "All Night Long", was released in 2010, with the homonymous single to separate, while the album entered at the top ten on the American album charts. "Confessions", was the band's sixth album, with seven names of the tracks being connected to the seven deadly sins. They also released an EP named "Fuck", whose characteristic is that all the titles of the songs have the word "Fuck"!

After the release of the band's seventh album, "Rock ''n'' Roll", Nelson and Muriel abandoned Buckcherry because of their different approach to the band's future plans compared with Todd's aspect. Kevin Roentgen on guitar and Sean Winchester on drums replaced them later.