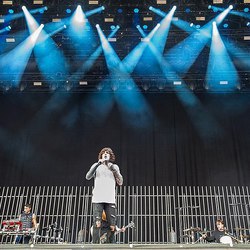 Bring Me the Horizon started in 2004, in Sheffield, South Yorkshire, when Oliver Sykes (vocals) and Matt Nicholls (drums) met (Lee Malia (guitars) and later Curtis Ward (guitars) and Matt Kean (bass guitar). They had influences from metalcore scene, but also from alternative metal and rock genres.

After a demo under the name "Bedroom Sessions", the band's first EP was "This Is What the Edge of Your Seat Was Made For", which came out in 2004. They later signed with Visible Noise and took an award at "The Kerrang! Awards" in 2006, for "Best British Newcomer". Following their first tour, the first album of the group, "Count Your Blessings" came out in 2006 in the UK, and next summer in the USA. It didn't have many positive reviews.

The second album "Suicide Season" came out in 2008 under Fredrik Nordström's production and had mixed critics, selling over 75.000 copies in Europe. In 2009, Ward left the band and Jona Weinhofen replaced him. After the remixed album, "Suicide Season: Cut Up!", the band released their third album, "There Is a Heaven, Let's Keep I a Secret", in 2010. It reached no. 17 on the US album charts and no. 13 on the UK, where it also topped two other categories, along with the Australian chart.

Many tours, fests and projects followed, before the band's fourth album "Sempiternal", which came out on April of 2013. Weinhofen had left the band on January, while Jordan Fish became a permanent member. After more festivals and tours, a live album and new singles, Bring Me the Horizon released the fifth album "That's the Spirit" in 2015. The album, with its alternative rock and metal style, peaked at the second position in both the USA and the UK, receiving very good critics worldwide. The band's sixth album came out, under the name "Amo", in January of 2019, topping the UK charts.