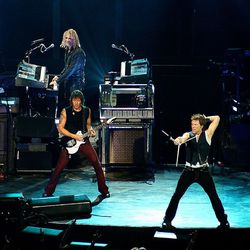 Bon Jovi was created in 1983, in Sayreville, New Jersey, by singer Jon Bon Jovi, together with David Bryan, Tico Torres, Richie Sambora and Alec John Such. In the beginning, Jon Bon Jovi formed "Atlantic City Expressway" when he was 16, a band with David Bryan and in 1980, another one under the name "the Rest". The same year he recorded "Runaway", a song that became popular on the radio stations. In 1983, together with bassist Alec John Such drummer Tico Torres and Bon Jovi's friend guitarist Dave Sabo, followed a small tour, launching Runaway. When Sabo left, Such and Torres brought Richie Sambora, who impressed Bon Jovi and joined the group.

Manager Doc McGhee helped them to record their first album, "Bon Jovi". It was released in 1984, with the hit Runaway in the album. The band's second album, "7800° Fahrenheit", was released in 1985 and even though it didn't match their expectations, it became gold. After 1986's successful album, "Slippery When Wet", with the top hits "Livin' on a Prayer" and "You Give Love a Bad Name", several awards followed, including an American Music Award. The next album, "New Jersey", gave Bon Jovi the record for the most Top 10 singles on the US charts, in the hard rock albums category. In 1989, Jon Bon Jovi along with Sambora appeared in MTV Video Music Awards, performing "Wanted Dead Or Alive" and "Livin' on a Prayer". It is regarded that this appearance, created the idea of the MTV Unplugged series!

The next album was released under the name "Keep the Faith" in 1992 and is characterized by a new page in the band's style. The lyrics were more serious and the sound was softer. However, the album became double platinum, including the homonym song and the hit "Bed of Roses". 2 years later, the band released the greatest hits album, "Cross Road", with the single "Always" staying almost six months on the top ten of the charts and becoming his best-selling single. The same year, the band awarded for the "Best Selling Rock Band" at the World Music Awards. After that, Hugh McDonald replaced Such who left the band.

In 1995, they released the sixth album, "These Days", which became immediately no. 1 in the UK, giving the band 2 more awards, for Best Rock Band on MTV Europe Music Awards and for best international band on BRIT Awards. After almost four years of working individually, the members reunited and released "Crush", their seventh album, with the hit "It's My Life", becoming one of their best in a decade. A couple of awards followed, with concerts and live events until 2002, when their eighth album Bounce was released.

The next years, the band released 5 more studio albums, with hits such as "Have a Nice Day", "Till We Ain't Strangers Anymore", "Not Running Anymore", a greatest hits album, following a lot of tours, concerts and various projects.