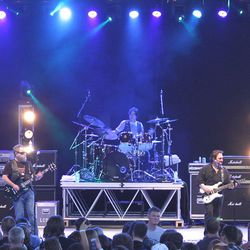 Blue Öyster Cult started as " Soft White Underbelly" - they used this name also in some gigs around the USA and UK in the 70's and 80's - in Long Island, New York, in 1967. The band's first line-up was Donald Bruce Roeser (known as Buck Dharma), who is the lead guitarist but he also takes part in vocals until today, Allen Lanier, who was also a rhythm guitarist, keyboardist and a backing vocalist, the drummer Albert Bouchard (percussion and vocals) who finally left in 1985, singer Les Braunstein (for 2 years only) and bassist Andrew Winters (3 years).

Many of the lyrics were from Pearlman''s poetry, like the song "Astronomy", while he was responsible for the band's contracts and for managing their appearances. He also chose pseudonyms for the group members. Apart from Pearlman, writer Richard Meltzer composed lyrics for a lot of albums. In 1968, the group recorded an album, but it was withdrawn next year after Braunstein left the group. Eric Jay Bloom replaced Braunstein and became lead vocalist (he also plays some instruments). After another single and several changes of the group's name, they finally chose Blue Öyster Cult in 1971 and released the first album with the same name.

Their second album "Tyranny and Mutation" came out in 1973. The next one, 1974's "Secret Treaties", with songs like "Astronomy", "Dominance and Submission" and "Career of Evil" became gold, having good reviews from the beginning. After "On Your Feet or on Your Knees", their first live album in 1975, the group released "Agents of Fortune", which became platinum, including the top hit "(Don't Fear) The Reaper". "Spectres", in 1977, was one of their best-selling albums, with popular songs such as "Goin'' Through The Motions" and "I Love The Night". One more live album followed in 1978, along with 1979's "Mirrors", that wasn't a success. Cult's eighth album, "Fire of Unknown Origin", came out in 1981 and contained the hit "Burnin'' for You".

The next album was 1983's " The Revölution by Night", without the participation of Albert Bouchard who had left, with Rick Downey taking his place. After the Revölution tour, Downey left the group and they finished the next album "Club Ninja", which was unsuccessful, with Jimmy (drums) and Tommy Zvoncheck (keyboards), since Lanier also abandoned the line-up. Bouchard had returned in early 1985, but left this time permanently, during a tour after the release of the album. The remaining two members, Bloom and Roeser, completed the tour with Jon Rogers on bass.

After 11 years of touring, releasing songs for a soundtrack and some other re-recorded, only 3 members stayed together, while many changes followed, especially in the part of rhythm guitar. They released 2 more studio albums and one live in 2002 and kept touring for the next years.