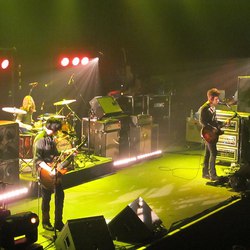 The American rock band from San Francisco, California, was formed in 1998, as The Elements, but later they discovered a band with this name, and changed it to " Black Rebel Motorcycle Club". The name was inspired by the movie "The Wild One" in 1953 and the motorcycle gang whose leader was Marlon Brando.

The band members are Robert Levon Been, Peter Hayes and Leah Shapiro, who took the place of Nick Jago in 2008. After Hayes having left The Brian Jonestown Massacre , he met Been at high school and formed the band. According to Been, Hayes had problems with his family and used to park outside Haye''s house and to sleep in his car. One year later, Hayes went to live with Been and his father and after searching for a drummer, they found Nick Jago. Jago was from Devon, England and after he left the fine art studies on Winchester School of Art, he went to California to stay with his parents. Hayes and Been dialed with the vocals, while Jago was playing the drums.

Their first record "B.R.M.C." was released in 2001. The song "Spread Your Love" according to NME (New Musical Express) was voted as the 27th best song of the year 2002, while it was used one year later in Vin Diesel''s film "A Man Apart". The second album "Take Them On, On Your Own", like the previous one, had classic hard rock influences, especially by Led Zeppelin, but also and from other bands such as Sonic Youth, The Verve, The Jesus and Mary Chain e.t.c. They criticized the USA government through songs like "US Government" and "Generation".

In 2004 they left Virgin Records and Jago abandoned the group after differences with Hayes. The third album "Howl", had good reviews despite its folk style. They signed to RCA in the USA and to Echo in the UK and they hired a new member, Spike Keating, to follow them on tour. Almost 3 years later, Jago returned to the group and they released their fourth album, "Baby 81" in 2007. They played live on the internet for MSN Music, on June 6, 2007.

In 2008, Jago left the band for second time, claiming that he was fired, but Been and Hayes didn''t admit it (in 2015, Hayes stated that they finally had fired Jago). Leah Shapiro, drummer of "The Raveonettes" during their tour, took Jago''s place. In 2008, they released "The Effects of 333", an instrumental album which was available only as a download. Two years later, the group released their sixth album, "Beat the Devil''s Tatto" and on November of that yera, their second live DVD, "Live in London". The next album was released in 2013 under the name "Specter at the Feast", having a mourning character because of the loss of producer Michael been, Robert''s father. Their eighth album, "Wrong Creatures", was released in 2018. 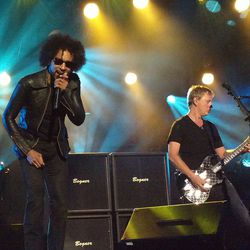