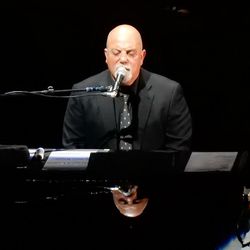 Billy Joel was born in The Bronx, New York, in 1949 and his full name is William Martin Joel. He also raised up on Long Island and these two places affected his music and his career.

When he stopped from high school, he became a member of two small bands, The Hassles and Attila, but later he made a new contract, following a solo career in 1971. His first album came out that year and took the name "Cold Spring Harbor". "Piano Man" was his second album in 1973 and it was followed by next year's "Streetlife Serenade", which was recorded along with various musicians, with Joel singing and playing piano and keyboards. To celebrate his return to New York City, he recorded partially his fourth album "Turnstiles" which came out in 1976.

In 1977, "The Stranger" became his best-selling album, including hits such as "Just the Way You Are" and "Movin' Out". In 1978, the album "52nd Street", became Joel's first to reach the top of the US charts, while the next one in 1980, under the name "Glass Houses", except the successful singles "Don't Ask Me Why" and "Sometimes a Fantasy", it contained the also no. 1 song "It's Still Rock & Roll To Me". 1982's "The Nylon Curtain", a more melodic album, was the first to be digitally recorded and mixed. One year later, his ninth album "An Innocent Man", was a tribute to styles from Joel's early years as a teenager. Two more albums followed, " The Bridge" in 1986 and "Storm Front" 3 years later, before he releases "River of Dreams" in 1993, his twelfth album during his solo career.

Joel released a classical album with the participation of Richard Hyung-ki Joo, a British-Korean pianist, in 2001. In the following years, he continued touring until nowadays, while he has taken part in various live shows and events. He has also used his voice in the character of "Dodger" in Disney's film, " Oliver & Company " in the past (1988) and among the awards and honors he has received, are the five Grammys and his induction in the "Rock and Roll Hall of Fame" in 1999.