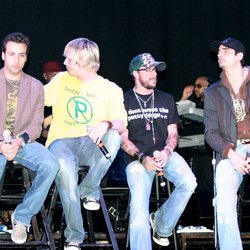 The Backstreet Boys started as an American boyband from Orlando. They have sold over 100 million records all over the world, becoming one of the best-selling music group in the world and the only one whose the first 9 albums have reached the top ten on the USA charts.

Formed in 1993, the band's five members are Howie Dorough, AJ McLean, Nick Carter, Brian Littrell and Kevin Richardson. They became famous from the first album "Backstreet Boys", in 1996 (not released in the USA). The next years, along with their first album in the USA with the same name, the second one named "Backstreet's Back", came out in the summer of 1997, becoming also successful in many countries around the world. The albums that made them superstars, were 1999's "Millennium" and 2000's "Black & Blue".

Two years later, in 2002, due to problems to the relationship with the record company and the decision of Carter to focus on his solo career, the band stopped the common appearances, until 2003, when they gathered to support McLean with his alcohol and drugs addiction and after reforming and solving their differences, they started to record their next album "Never Gone", which was came out in 2005. One year later, Richardson left the band. 2007's "Unbreakable", had good reviews and after the "Unbreakable" tour, they began to record their next album "This Is Us", which came out in 2009 and peaked at the ninth position at the US charts.

Backstreet Boys began a tour with New Kids on the Block in 2011. Next year, in a show in London, they stated that Richardson had essentially returned back from 2010! They released their eighth album "In a World Like This" in 2013, which entered at the top five, not only in the USA but also in Germany, Netherlands and a few other countries, even in Taiwan.

The band continued having success for many years, receiving a star on the Hollywood Walk of Fame in 2013, and also having its first movie in 2015, the documentary " Backstreet Boys: Show 'Em What You're Made Of".