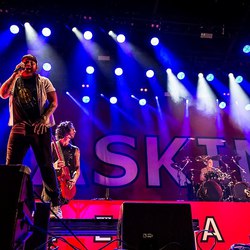 Asking Alexandria were created by Ben Bruce (lead guitar, keyboards e.t.c.) in 2006, in Dubai, UAE. The group released its first album in 2007, under the name “The Irony of Your Perfection” and after some changes to the formation, Bruce recreated another line-up in 2008 and returned to his country, England. The group, which settled down in York, consisted of Bruce, Danny Worsnop (vocals and other), Cameron Liddell (guitars), Joe Lancaster (bass), James Cassells (drums) and Ryan Binns (keyboards).

Alexandria’s sound was a mixture of metalcore and post-hardcore, with hard rock and electronicore elements. In the beginning of 2009, Binns and “Lancaster left the group and Sam Bettley became the new bassist later. The new line-up’s first album was “Stand Up and Scream” and was released in 2009. Alexandria toured around the USA with several other rock bands of similar range and music style, while they followed as support act the band Dance Gavin Dance in their European tour. After the EP “Life Gone Wild”, the group’s next album release was “Reckless & Relentless” in 2011, which entered at the top ten of the US album charts.

Asking Alexandria continued with live performances in Australia, UK and USA, along with Hollywood Undead, Avenged Sevenfold (support) and other, while they shared the stage with great bands like Motörhead and Slayer. They took part in various fests such as “Metalfest” and they released another EP, with covers of famous rock groups from the 80’s. The album “From Death to Destiny” came out in the summer of 2013 and reached fifth place on the charts in the USA. It contains the song “Moving On” and it is the group’s highest album on the charts. More festivals and live appearances followed, including a tour with Korn (as support), the “Never Say Never Festival” in March of 2014, next to Bring Me the Horizon and other.

Worsnop left the band in 2015 and was replaced by Denis Stoff, who was the main vocalist to their next album named “The Black”, that contained the song “I Won’t Give In”. In 2016, Worsnop returned and after the "Ten Years in the Black Tour”, Alexandria finished their homonymous album that came out in late 2017, an album with a lot of melodic hard rock style. 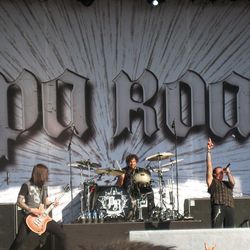