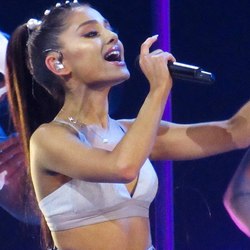 Ariana Grande was born in Boca Raton, Florida, in 1993. Her full name is Ariana Grande-Butera and she has also Italian ancestry. She took her name from an animated character, while her parents got divorced when she was very young. Taking part in children theatrical performances and musicals, she started thinking of a career in music, when she was thirteen.

After winning an award for her role in the musical "13", Grande later appeared in "Victorious" TV-Series, but later decided to focus on music and her first work was in the show's soundtrack. She began uploading her covers on social media and after her first contract, she recorded her first song, "Put Your Hearts Up", which became gold later. She took part in the next soundtracks of Victorious, while she worked with artists like Mika and continued staring in other musicals e.t.c.

Grande's debut album was "Yours Truly" that came out in 2013, entering at the top on the US charts, while it's single "The Way" reached the top 10. She followed Justin Bieber in a tour and she won her first American Music Award in the same year. She continued receiving music awards while her second album "My Everything" came out in the summer of 2014, reaching the top of the charts for second time. It contains collaborations with artists such as Iggy Azalea, Zedd, Big Sean and other, with hits like "Problem" (it won five music awards, including an MTV Video Music Award"), "One Last Time" and "Break Free".

Grande continued the live appearances including countries that she visited for the first time, while she collaborated with Major Lazer, Andrea Bocelli and others. Her next's successful album was 2016's "Dangerous Woman", with the songs "Dangerous Woman" and "Side to Side" (with Nicki Minaj) to separate. She performed live with Christina Aguilera in "The Voice" series, while attended various shows and events, next to several great artists.

2018's "Sweetener" was Grande's fourth album, which became no. 1, not only in the USA charts, but also and in many other countries. Pharrell Williams participated in almost half of the songs and some of the album's hits are "God Is a Woman" and "No Tears Left to Cry". Sweetener's success brought Grande her first Grammy, for "Best Pop Vocal Album". Her recent album " Thank U, Next" which entered the top of the album charts again in the USA and not only, came out in February of 2019 and includes the top hits "7 Rings" and " Thank U, Next", along with " Break Up with Your Girlfriend, I'm Bored", making Grande the first solo artist who had three songs entering at second place or higher on the US charts, at the same time! Apart from this achievement, she is the first having five top singles from the corresponding albums reaching the top ten.