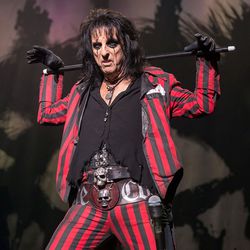 Alice Cooper was born in 1948 in Detroit, Michigan and he is regarded as one of the most important rock personalities and musicians, especially in the area of shock rock! His real name is Vincent Damon Furnier and he has another five ancestries. He grew up in Detroit but he later went to live in Phoenix with his family.

When he was 16, Cooper along with four friends form a group which performed music parodies in a school talent show and after winning the contest, they decided to form the band “the Spiders” which later was renamed to “Alice Cooper”, a name that Furnier espoused in 1975 and started to have a role of a man who was wearing make-up and was part of a theatrical show. With the band, Cooper established shock rock style and released seven studio albums from 1969 to 1973, with 1972’s “School’s Out” and 1973’s “Billion Dollar Babies” to separate, while four of them became platinum. Some of the group’s songs that separated were “I’m Eighteen”, “School’s Out” (one of their best songs), Judy Collins’ cover in “Hello Hooray”, “Elected”, “No More Mr. Nice Guy” and more.

After the band’s hiatus in 1974, Cooper began appearing in several TV-shows and next year started his solo career, releasing “Welcome to My Nightmare”, which reached the fifth position on the US album charts. Among its hits was the ballad “Only Women Bleed” and it became platinum in the USA. From this point, Cooper followed a great career which includes 19 studio albums until 2017, several compilation and live ones, as well as participation in many movies, while he created his own classic show named “Nights with Alice Cooper”.

Alice Cooper has been nominated for three Grammy Awards while he entered into the “Rock and Roll Hall of Fame” with his synonymous band in 2011. He is very famous for his live performances and his theatrical shock rock shows while he has experimented with various rock genres such as hard rock, glam rock, heavy metal and psychedelic rock. His most recent studio album is 2017’s “Paranormal”, while some of his most popular hits, especially until 90’s, are “I Never Cry”, “You and Me”, “How You Gonna See Me Now”, “Poison” (maybe his most mainstream song), “House of Fire”, “Hey Stoopid”, “Brutal Planet” and more.