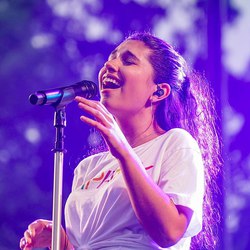 Alessia Cara was born in Brampton, Ontario, in 1996 and has Italian ancestry by both of her parents. Her full name is Alessia Caracciolo and when she was very young, she used to write poems. She also dealt with theater, while she started playing guitar when she became ten and three years later she uploaded her first cover songs on YouTube.

Alessia Cara’s music style is R&B, with pop, indie pop and soul elements in some of her songs. After signing her first contract, in 2014, Cara recorded her first single “Here”, which came out at the end of April of 2015 and entered the top 5 on the US Billboard Hot 100 chart. The song was praised by the critics and her first EP named “Four Pink Walls” was released a few months later. It was followed by Cara’s first album “Know-It-All”, that came out in November, peaking at no.9 on the Billboard 200. It became Platinum later and contains also the hit “Scars to Your Beautiful”.

Cara received her first Juno Award next year and she became a part of Coldplay’s “A Head Full of Dreams Tour” in the summer of 2016. She performed at the Glastonbury Festival, she took part in TV-shows and she collaborated with Zedd and Logic, to the 2007’s successful songs “Stay” and “1-800-273-8255” respectively.

2018 was a very important year for Cara, since she became the first Canadian artist winning the Grammy Award for “Best New Artist”. After several new songs and live appearances, Cara’s second album named “The Pains of Growing”, came out on November of 2018. She worked with Alec Benjamin for the song “Let Me Down Slowly” and she will tour next to Shawn Mendes as a support act.