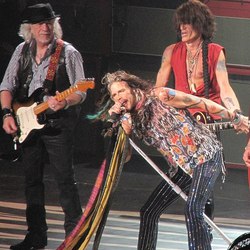 After their first contract, Aerosmith recorded their homonymous album that came out in the beginning of 1973 and contained the song “Dream On” which later became one of the band’s most famous ballads. Aerosmith’s second album was 1974’s “Get Your Wings” and was followed by “Toys in the Attic” which came out in April of 1975 and included the hit “Walk This Way”. Two new editions of “Dream On” and “Walk This Way” were released in 1975 and 1976 respectively, both entering at the top ten of the charts.

The next three successful albums were 1976’s “Rocks” (which reached the third position on the charts) “Draw the Line” that came out in late 1977 and 1979’s “Night in the Ruts”. After a fight among the members during a concert, Perry was removed from the group and Aerosmith completed “Night in the Ruts” with a couple of other musicians, including Jimmy Crespo who replaced Perry. During the recording of their seventh album “Rock in a Hard Place” in 1982, Whitford abandoned the group and Rick Dufay replaced him. Both Whitford and Perry returned in 1984 and Aerosmith started the “Back in the Saddle Tour”, releasing their second live album named “Classics Live!” later.

After 1985’s album “Done with Mirrors”, Aerosmith continued touring and recorded their ninth studio album named “Permanent Vacation” that came out in 1987. It included the hits “Rag Doll” and “Dude (Looks Like a Lady)”, along with the rock ballad “Angel”, which reached the third place on the charts. It was followed by “Pump”, that came out in 1989 and entered at no. 5 on the US charts, with the songs “Love in an Elevator” and “Janie's Got a Gun” to separate. The latest brought to Aerosmith their first Grammy Award later. The band toured to promote the album, including participation on MTV Unplugged series next year.

Aerosmith’s following two albums reached the top of the American charts. 1993’s “Get a Grip” contained the hits “Livin' on the Edge” (it won a Grammy), “Cryin’” and “Crazy” (it also won a Grammy). Aerosmith established their big name on stage, by touring in all over the world, while they recorded the next album “Nine Lives”, that came out in 1997, with the songs “Falling in Love (Is Hard on the Knees)” and “Pink” to separate. The 1998’s rock ballad “I Don't Want to Miss a Thing”, which was part of the soundtrack for the movie “Armageddon”, became one of the band’s most successful songs, reaching the top of the charts in many countries, including the USA.

In the following years, Aerosmith recorded three studio (included a cover one) and several live and compilation albums. They shared the stage with great bands and artists of various music genres, while some of their songs have been used in movies and other projects. They are regarded as one of the greatest rock bands in the USA and they have received many awards and nominations.